Freedom of information is a very important part of open governance, and as such plays one of the key roles for the governments around the world that strive towards more openness, transparency and accountability within the frameworks of the Open Government Partnerships (OGP). Many organizations involved in the initiative, either at an international or local level, specialize in freedom of information. Recently, two internationally recognized organizations specialized in right to information, Access Info Europe and Centre for Law and Democracy, published a draft of a set of recommendations for the member countries of the Open Government Partnership. These recommendations focus on the measures that can be implemented by the governments for progressive improvements to the right to information (RTI).

Georgia has recently adopted a new legislative act, the Government Decree “about Electronic Request and Proactive Publication of Public Information”, that went into force on September 1, 2013. This project of the Government of Georgia was shortlisted for the Bright Spots Award during the OGP summit in London along with innovations from seven other countries and thus recognized as a very important step towards achieving the goals set by the Partnership. It was developed in very close cooperation with and largely based on the recommendations of the civil society of Georgia, another positive example for the members of the Partnership. It is a significant development in the RTI area.

The abovementioned recommendations form the right to information chapter of the Open Government Guide, developed by the Transparency and Accountability Initiative in close cooperation with organizations that specialize in different aspects of Open Governance. The Guide was released at the Open Government Partnership Summit, which was held on October 31-Novermber 1, 2013, in London, UK. It focuses on many topics that play an integral role in the transparency and openness of the Governments. The overarching topics include budget, citizen engagement, protection of whistleblowers, public services and others.

» Putting in place the required institutional structures for implementation of the law;
» Expanding the scope of proactive publication;
» Undertaking robust promotional measures, including by raising public awareness about the right to information;
» Implementing ‘transparency by design’, including by using digital technologies to integrate RTI into all stages of information preparation and processing. 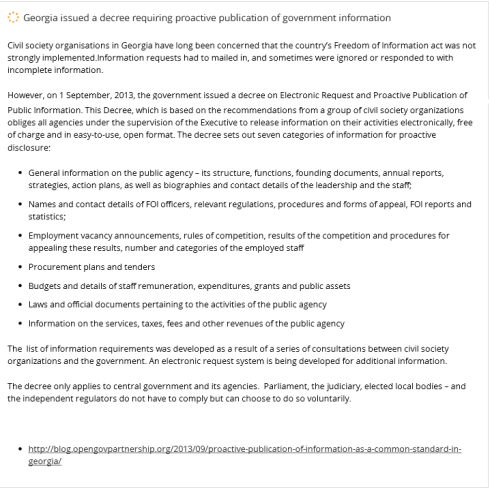 The Decree of the Government of Georgia regarding proactive disclosure is one of the examples of successful projects in the area of proactive publication in the right to information chapter of the Open Government Guide. The short description in the Guide focuses on the proactive disclosure part of the document and highlights several points that make this initiative important for both Georgia and the OGP community in general. As mentioned in the Guide, a list of information to be published proactively is attached to the Decree of the Government of Georgia. This list was also developed by the civil society of Georgia and was later revised and adopted by the Government. The list contains the following general sections that contain specific points: general information about the institution, information about the FoI officers and associated procedures and regulations, vacancy announcements and the relevant information, procurements, budgets, laws and official documents regarding the activities of the institution, and information on fees, taxes and revenues of the institution.

While the initiative has been largely successful, only the central government and its agencies are subject to the obligation to closely follow the list of information to be published proactively attached to the Government Decree. According to the amendments in the General Administrative Code of Georgia, all public authorities are obliged to come up with their own lists, but not all have done so at this point. Apart from this, an electronic request system is in development at the moment, and after its implementation the process of obtaining public information will be further simplified, as the citizens and organizations had to mail in requests in the past.

The Open Government Guide calls on the participants of the initiative to take into account the recommendations offered in the document when developing their second action plans within the frameworks of OGP. Though Georgia has made significant progress in several key areas, there is still much to be done.

The progress of the government of Georgia will be evaluated by an independent expert in the Independent Reporting Mechanism (IRM) report, to be published at the end of January 2014.