On December 3rd, Institute for Development of Freedom of Information (IDFI) in cooperation with the Law School of the Ilia State University organized a public discussion on the topics of Parliamentary Openness. Discussion took place at the Book House “Ligamus” and the speakers of the discussion were: MP and the Chairperson of the Inter-Factional Group of the Parliament of Georgia – Tamar Kordzaia, and MP and the member of the Inter-Factional Group – Khatuna Gogorishvili. Representatives of IDFI: Davit Maisuradze and Tamar Nadibaidze also attended the discussion.Davit Maisuradze introduced attendees with the mission and history of the Open Government Partnership (OGP). The OGP is a multilateral initiative and intends to provide a platform for domestic reformers to make their governments more responsive, accountable and transparent to their citizens. 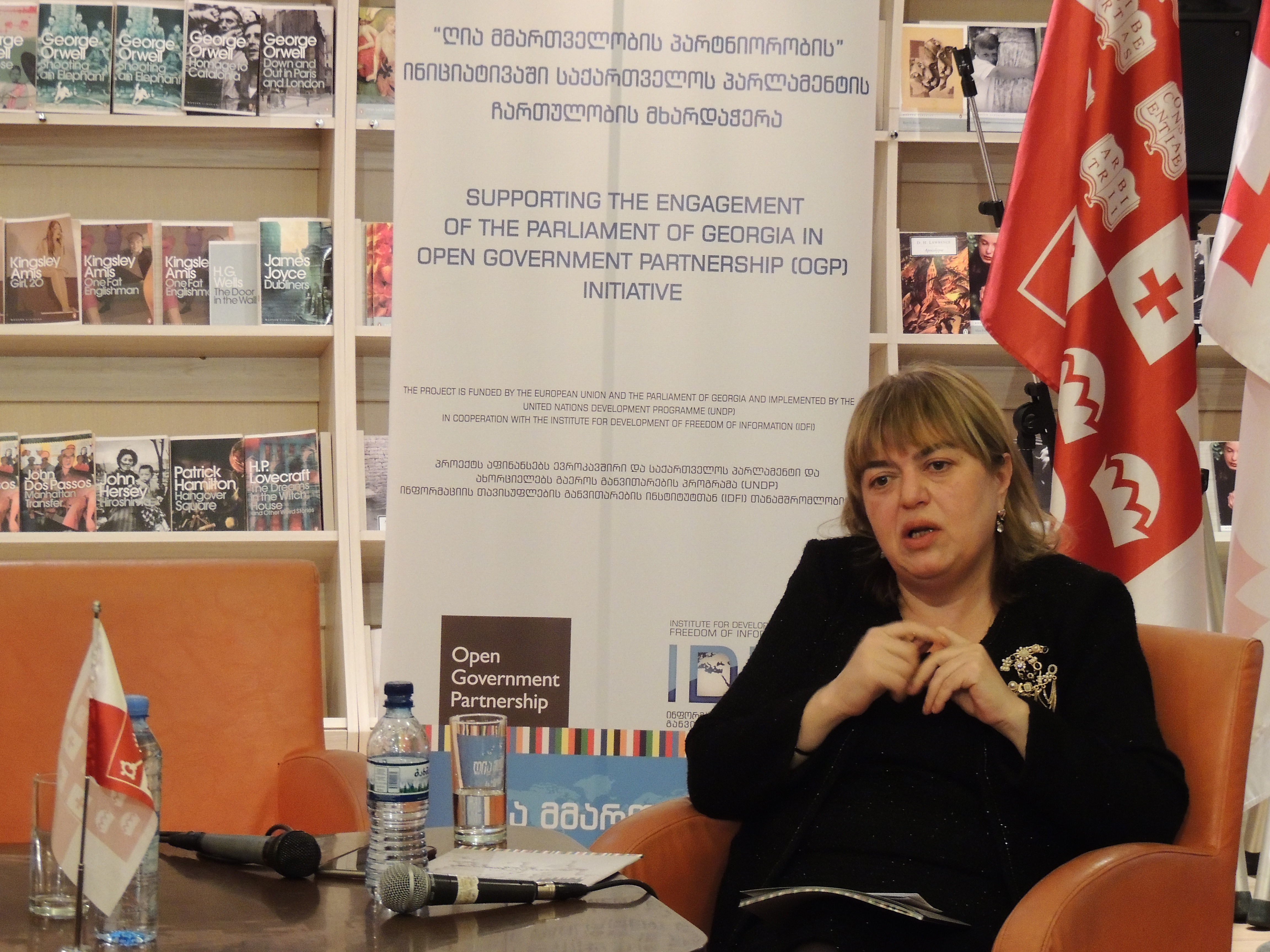 Tamar Kordzaia spoke about the importance of the Open Government Partnership. She noted that the initiative gives a great opportunity to the citizens to get information and answers on their questions from the politicians more easily. MP claimed that many individuals think that after the elections they lose connection with the politicians and OGP is a good chance to eradicate this feeling and reality since the partnership encourages technology and innovation-based development. Tamar Kordzaia also claimed, that the direct communication with the society is certainly the best, however, it is not always possible and technological development makes communication with the society considerably facilitated. MP also informed the students that they can attend the Committee Hearings at the Parliament of Georgia and express their ideas, initiatives orally or written, which can later become the draft laws.

It is also important to note that Tamar Kordzaia spoke about the Code of Ethics, which should be adopted according to the Open Parliament Georgia Action Plan 2015-2016 but is lingering since it is a very sensitive topic for the MPs. However, Tamar Kordzaia thinks that the Code of Ethics must be adopted and seen as a way of increasing trust of society to the MPs. In addition to this, Ms. Kordzaia mentioned that establishing Permanent Parliamentary Council on Open and Transparent Governance will ensure transparency of the legislative activities; while transparency, according to her, is one of the main guarantees of peace in a state. 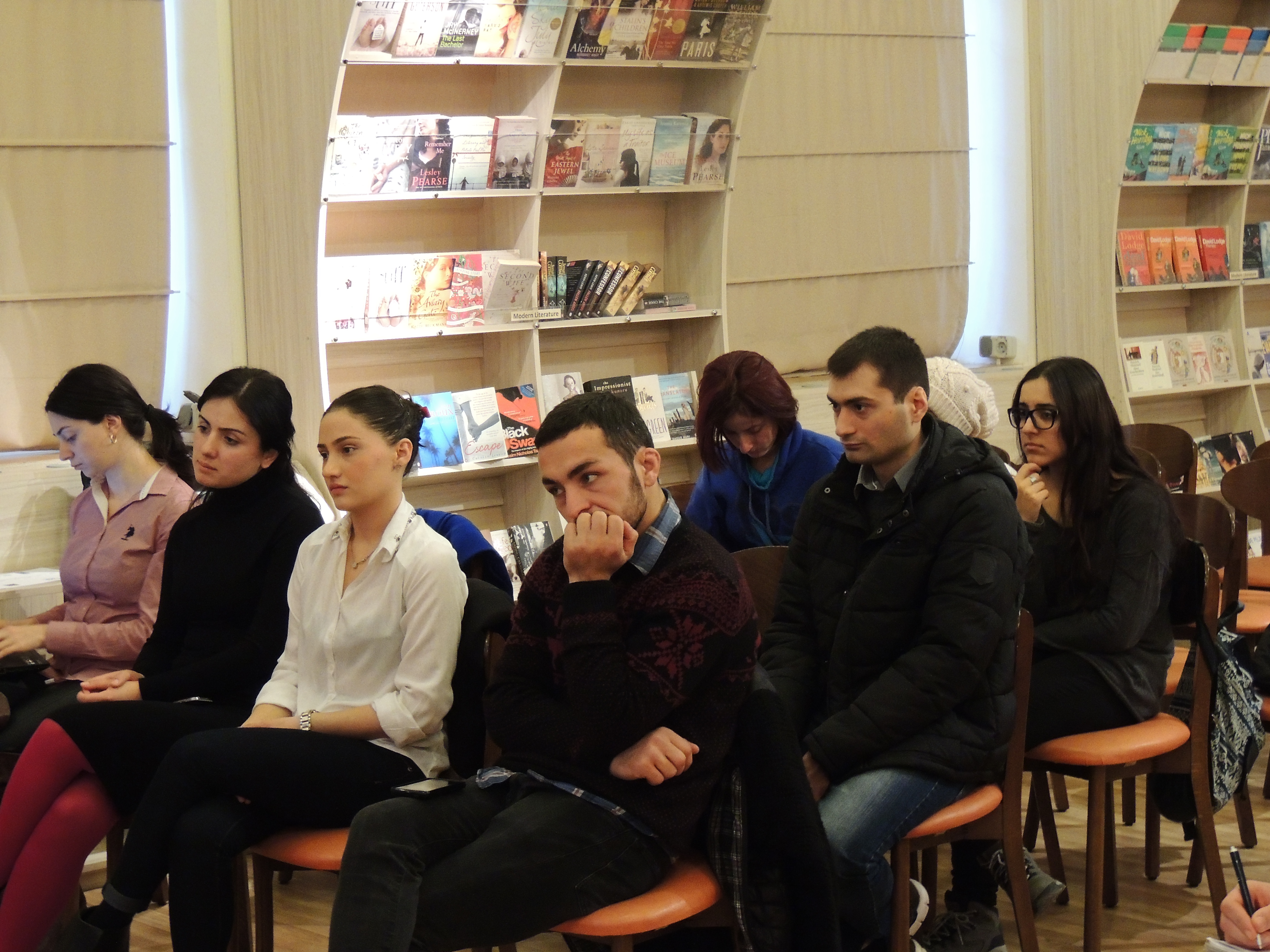 Khatuna Gogorishvili underlined the significance of civic engagement in Open Government Partnership. The MP suggested that civic activism has no alternative in the world since it is the best guarantee to leverage the government and ensure that it is open and transparent, otherwise no government will be willing to open its doors completely.

Ms. Gogorishvili said that it is very important to fulfill the 18 commitments of the Open Parliament Georgia Action Plan 2015-2016 since the Action Plan regulates problematical topics and the politicians should show political will to carry out the commitments laid out in the Plan.
The MP also touched upon the issues that are problematical for the Parliament, she talked about difficulties of obtaining the public information from the public institutions. Ms. Gogorishvili noted that the institutions get especially aggressive if the request on public information concerns the bonus payments. Khatuna Gogorishvili pointed out the Ministry of Justice and the Ministry of Internal Affairs as the institutions from which, receiving a public information is absolutely impossible for her. It goes without saying that such practice hinders parliament’s role to conduct control on the government. Moreover, she talked about the quality of the information she receives from other institutions. According to the MP, she often gets the answer that the information she is asking for requires a comprehensive analysis, thus they will reach out to her later, but no one ever reaches out to her afterwards.
As the speakers finished their speeches the attendees had an opportunity to ask questions and the students were curious to know – whether civil society communicates effectively with the Inter-Factional Group of the Parliament of Georgia, whether Georgia has a credible chance to become a Co-Chair of the Open Government Partnership and if obtaining public information from the local self-governments is also a problem. This topics spurred an interesting discussion.
Institute for Development of Freedom of Information (IDFI) plans to conduct similar public discussions on the topics of Open Parliament for raising awareness of the civil society.