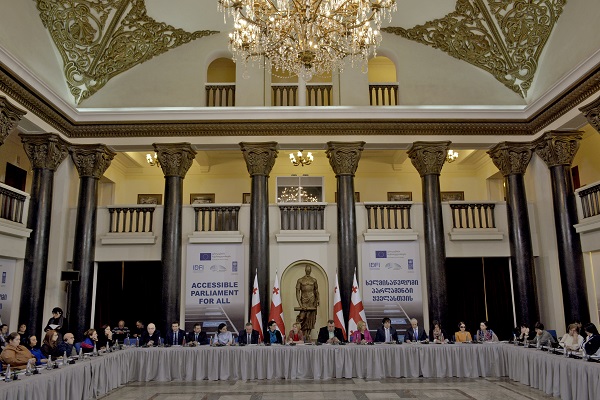 As part of the Global Legislative Openness Week, the Permanent Parliamentary Council on Open Governance held a meeting – Accessible Parliament for All and presented plan to adapt the Tbilisi building to the needs of the people with disabilities.  The meeting was supported by the European Union (EU) and United Nations Development Programme (UNDP) in partnership with the Institute for Development of Freedom of Information (IDFI).

The Parliament of Georgia undertook the commitment to adapt Tbilisi building and resources to the needs of people with disabilities as part of the Open Parliament Action Plan (Commitment 1.5). Immediately the plan was developed by the Parliament in cooperation with the non-governmental organization Mariani with the support of EU, UNDP, and IDFI in the framework of the project titled Strengthening the System of Parliamentary Democracy in Georgia.

The event was attended by people with disabilities, local associations and non-governmental organizations working on the issue, Parliament Chairman Irakli Kobakhidze, Members of Parliament, as well as representatives of EU, UNDP, and international and diplomatic organizations.

Irakli Kobakhidze, Chairman of the Parliament of Georgia: “I am glad that the  Parliament of Georgia hosts such an important event  within the framework of the  Global Legislative Openness Week. This  once again confirms our willingness to  enhance and promote citizen-centered and innovations based governance. I would  also like to  emphasize the norms established by the new edition of the  Constitution  of Georgia, in which the state is obligated to create  special conditions for persons  with disabilities to realize their rights  and interests. The Parliament wants its services and  infrastructure to be adapted to the needs of persons with 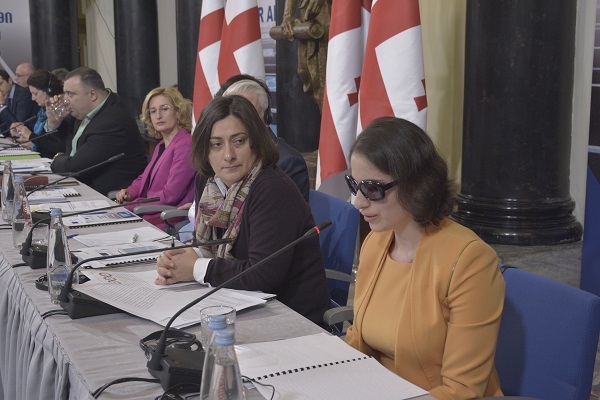 disabilities, in order to facilitate their equal involvement and participation in  parliamentary  activities. We are proud to announce that in the  nearest future the Parliament  building will be fully restored and  made accessible to people with mobility and  vision restrictions. Today, we would like to introduce the plan to adapt the Tbilisi  building, which is a commitment under the Open Parliament Action  Plan of Georgia.  I would like to thank the European Union, UNDP, IDFI and Mariani for their special contribution in this process.”

Shombi Sharp, UNDP Acting Resident Representative in Georgia: “I would like to thank the Speaker of the Parliament for personally addressing this important issue. Also I would like to thank the Chairperson of the Council and partners, such as IDFI, who were helping to implement this work, Mariani as well – the key partner in this process and of course, European Union, who helped to make all this possible.”

Dorota  Dlouchy-Suliga, Head of the EU Delegation’s Political, Press and Information Section: “In Georgia what we see is that the government’s, the parliament’s and most recently Tbilisi Municipality’s efforts to increase transparency and accessibility show high commitment to OGP principles and values, and in recognition of this, Georgia has been selected as the Chairperson of the Partnership for 2017-2018.”

Giorgi Kldiashvili, Executive Director of the IDFI: “This event is dedicated directly to adapting the building of the Parliament of Georgia for persons with disabilities. This is a significant issue, since it is one of the priorities for the Global Legislative Openness Week, being held not only in Georgia but in various other countries as well.” 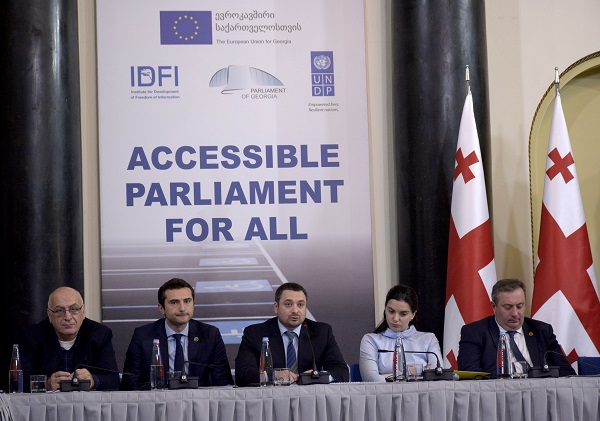 At the event, Irina Pruidze, Head of Permanent Parliamentary Council on Open Governance spoke about the Council, its work and achievements.

Mariam Mikiashvili, representative of the non-governmental organization Mariani and Rati Ionatamishvili, First Deputy Chairman of the Human Rights and Civil Integration Committee, presented the plan for adapting the Parliament building to people with special needs.

The plan describes the steps necessary for adapting the Parliament building, including installation of ramps and platform lifts, tactile trails and maps, and voice navigation systems. Changes will be made to all key areas of the Parliament building – entrances, stairs, session halls, briefing rooms, sanitary-hygienic facilities and cafeterias.

A video recording of the event can be found here.

The Plan is also available here.