Practical ways of ensuring a transparent and participatory legislative process were the focus of a workshop held by the Legal Issues Committee of the Parliament of Georgia in cooperation with the OSCE Office for Democratic Institutions and Human Rights (ODIHR), European Union (EU), United Nations Development Programme (UNDP) and the Institute for Development of Freedom of Information (IDFI), on 18 and 19 December 2017 in Tbilisi.

The event enabled over 56 representative from the Parliament of Georgia (MPs and staff members), civil society and international organizations to discuss the best international practices of public consultations and citizen engagement in lawmaking based on findings of the OSCE/ODIHR comprehensive assessment on the legislative processes in Georgia.

The workshop opened with the introductory remarks from Eka Beselia – Chair of the Legal Issues Committee and Working Group on Public Consultations, Permanent Parliamentary Council on Open & Transparent Governance of the Parliament of Georgia, Yuri Marchenko – Associate Legal Officer at the ODIHR and Gigi Bregadze – Democratic Governance Team Leader at UNDP in Georgia.

This was the second thematic event to build on the findings of the 2015 OSCE/ODIHR Assessment of the Legislative Process in Georgia. Conducted in co-operation with the Parliament of Georgia, the assessment provided an in-depth analysis of the regulation and practice of lawmaking in Georgia and made recommendations for improvement, including with regard to public consultations. 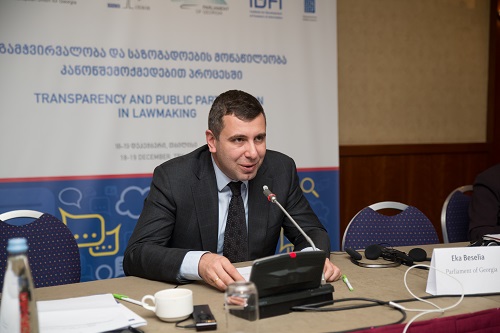 “Georgian Parliament is ready to increase civic participation in the lawmaking processes and this is well reflected in the Open Parliament Action Plan and our work as well. This workshop will significantly contribute to the implementation process of the Action Plan. We create transparent and open space for more civic participation in the legislative processes in Georgia,” said Eka Beselia, Chair of the Legal Issues Committee of the Parliament of Georgia.

Workshop discussions benefited from contributions by the ODIHR expertsMelanie Sully(Austria), Sandra Pernar (Croatia) and Liia Hänni (Estonia) who shared examples of good practice in enabling and enhancing public participation in parliamentary legislative activities, including through the use of digital technology.

“Meaningful public consultations and other forms of public participation are instrumental in ensuring that legislation is both effective and fully compliant with human rights” said Yuri Marchenko, ODIHR Legal Officer. “The workshop was an opportunity for a detailed examination of practical solutions which Parliament could use to make its legislative work more open and participatory.”

The concluding sessions of the workshop were dedicated to discussing the draft amendments to the Parliamentary Rules of Procedure that promote wider public participation in the work of the Parliament. Namely, the modifications refer to a) submitting e-petitions and collecting e-signatures for legislative initiatives and providing feedback to citizen comments on draft legislation in Georgia; and b) the status, composition and operation of consultative councils at the parliamentary committees. The amendments were prepared by the Working Group on Public Consultations of the Permanent Parliamentary Council on Open and Transparent Governance, supported by the European Union (EU), UNDP and IDFI. 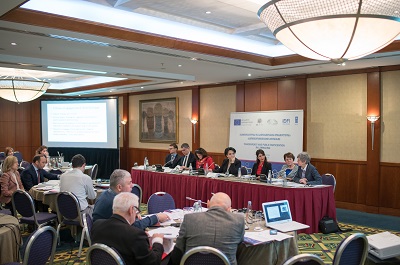 “The European Union strongly supports Georgia’s efforts to achieve transparency, openness and citizen engagement in governance and lawmaking, especially as the country is chairing the global Open Government Partnership (OGP) in 2018 and has to demonstrate the exemplary commitment in this field,” said Sophie Huet Guerriche, Coordinator for the Governance Sector at the EU Delegation to Georgia.

Georgia joined the Open Government Partnership (OGP) in 2011. In 2015, this was followed by the endorsement of the Declaration on Parliamentary Openness by the Parliament of Georgia and the adoption of the country’s first legislative openness action plan. In May 2016, Georgia, together with France, became a Co-Chair of the OGP Steering Committee and, in September 2017, assumed the OGP chairing role for a year.

See the photos of the even here.