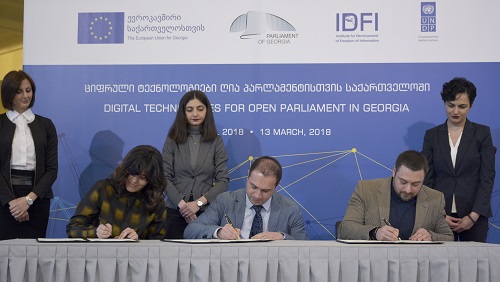 Citizens of Georgia can now access public information, keep track of the legislative work and send electronic requests to their Parliament via the new Public Information Module and Mobile Application, developed with the assistance of the European Union and United Nations Development Programme (UNDP), in cooperation with the Institute for Development of Freedom of Information (IDFI).

The new technology was presented to the MPs, civil society and international organizations on 13 March 2018.

“Electronic tools ease public access to the parliamentary information and promote citizen engagement into legislative process. This is an important step forward to enhancing legislative openness and introducing e-Parliament in Georgia,” said Irina Pruidze, Chairperson of the Permanent Parliamentary Council on Open and Transparent Governance.

She also noted that the new electronic tools are part of the Parliament’s commitments under its 2017 Open Parliament Action Plan. 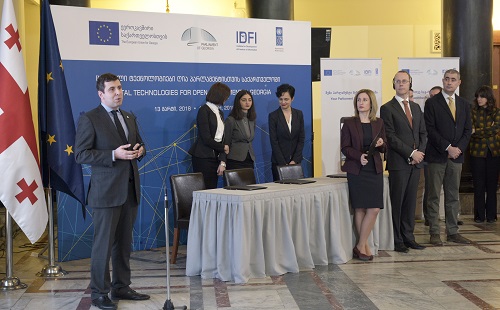 Vincent Rey, Head of Cooperation at the Delegation of the European Union to Georgia, stressed the importance of the Parliament’s cooperation with civil society and the public. “Democracy is one of the core values of the EU and a common commitment between the EU and Georgia.  This new system, is an example of the support we provide to the Parliament, and we hope that it will make the legislative process more open and accessible to Georgian citizens,” Vincent Rey said.

The participants of the event were also addressed by Gigi Bregadze, UNDP Assistant Resident Representative a.i., and Levan Avalishvili, IDFI Programs Director, who introduced the new electronic tools and their unique functions for promoting Open Parliament principles in Georgia.

“The GeoParliament App allows citizens to follow the parliamentary work on their mobile phones, comment on draft laws and keep track of the Parliament’s agenda, including the dates of parliamentary sessions, committee hearings, bureau sittings and discussions on the new pieces of legislation. The Public Information Module eases access to the public information, such as the Constitution of Georgia, Parliament’s Rules of Procedure, bureau decisions, and orders and decrees of the Parliament Speaker. In addition, citizens will be able to electronically request information about the Parliament’s budget, expenditures and procurement,” Levan Avalishvili said. 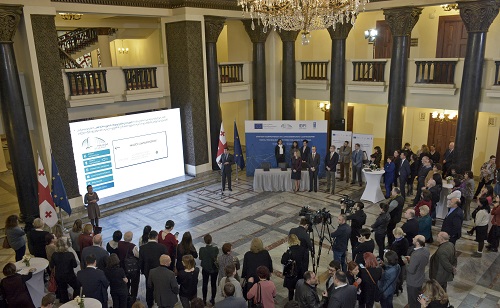 Open Parliament is part of Georgia’s efforts under the Open Government Partnership (OGP), international platform that unites 75 countries to help their governments become more open, accountable, and responsive to citizens. Georgia is chairing the OGP this year and will be hosting the 5th annual OGP summit in July 2018. 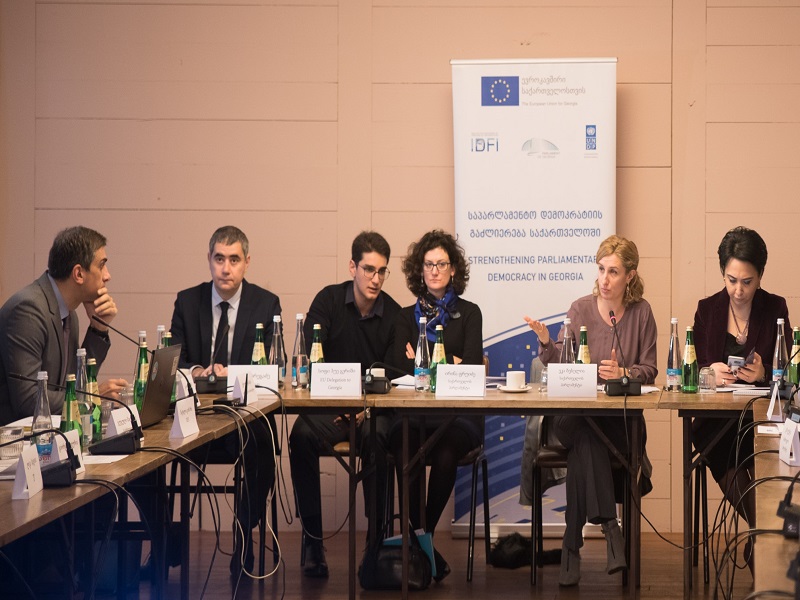 Georgia has recently started working on its third Open Government Action Plan, while it has yet to complete the main commitments of the second one. The study presents the reasons why second Action Plan commitments were not met, possible consequences and recommendations to be considered in the future.
The Open Government Partnership (OGP) is an international initiative that was launched in 2011 and currently includes 69 states. OGP member states develop annual action plans and voluntarily take on commitments to promote open government principles of transparency, accountability, citizen participation, and technology and innovation. Georgia joined the OGP in 2011. The action plan development process is coordinated by the Open Government Georgia Forum (Forum), which unites representatives of government, international and non-governmental organizations, and is co-chaired by the Institute for Development of Freedom of Information (IDFI).

END_OF_DOCUMENT_TOKEN_TO_BE_REPLACED 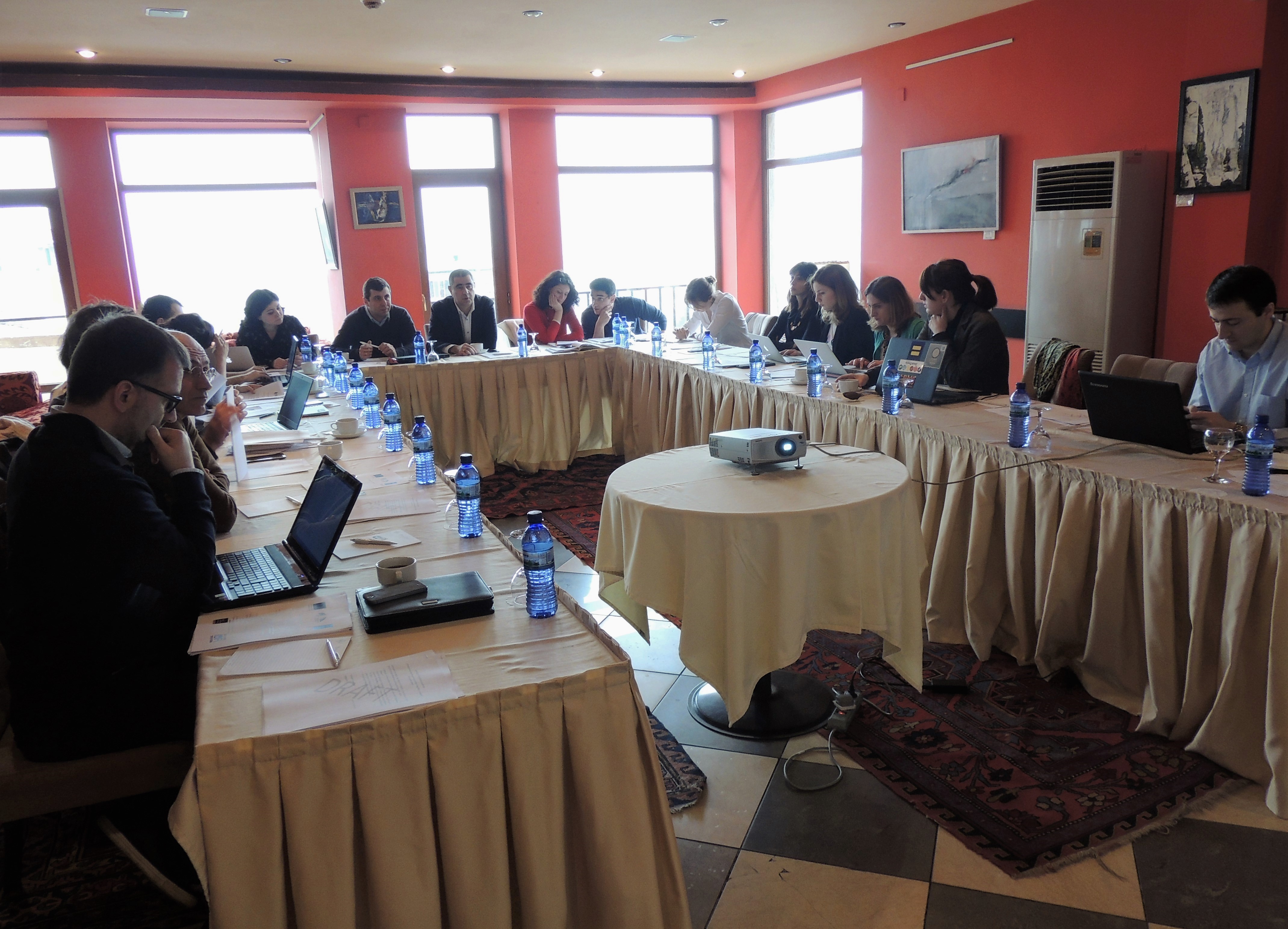 The Consultative Group of the Permanent Parliamentary Council on Open and Transparent Governance held a workshop on April 11. The group presented and discussed the amendments to the Parliamentary Rules of Procedure required for fulfilling the commitments of the Open Parliament Georgia Action Plan.
The opening speakers were:
1. Sophie Huet-Guerriche – program manager of the EU Delegation to Georgia;
2. Gigi Bregadze – head of the Democratic Governance Team at UNDP Tbilisi Office;
3. Levan Avalishvili – board chairman of the Institute for Development of Freedom of Information (IDFI).
END_OF_DOCUMENT_TOKEN_TO_BE_REPLACED

First of all, I would like to express my gratitude for the efforts of the Georgian government and you personally in promoting the development of open governance, accountability, transparency, and citizen participation.

It is apparent to us that open governance and effective public administration are a priority for the Georgian government. This is recognized not only domestically, but also at the international level by a number of important indices and rankings. However, it is also apparent that more effort and political will is required to implement the necessary reforms.