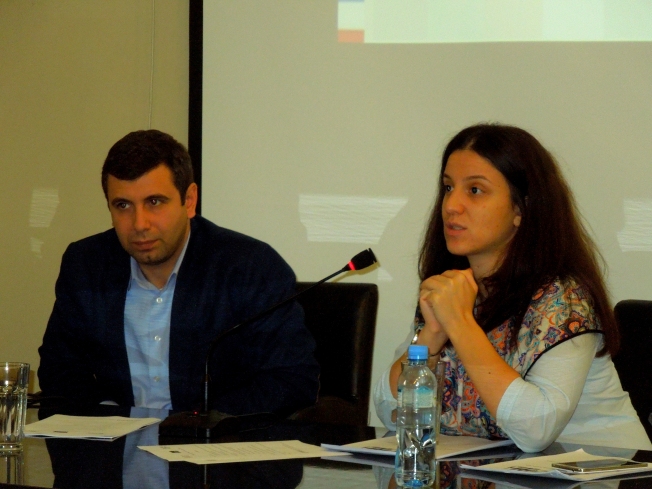 On October 11, Institute for Development Freedom of Information (IDFI) and the Ministry of Justice of Georgia conducted the workshop on OGP related issues with Tbilisi-based media-society.

The chairmen of IDFI-Levan Avalishvili and the national coordinator of OGP Georgia – Ketevan Tsanava spoke about past and future activities in accordance with the OGP action plan.

Within the implemented commitments of the action plan of 2012-2013, the e-request of public information draws the journalists’ attention. They claimed that the standard of FOIA request varies depending on the decision of different public institutions. Some state institution requires the scanned version of official letter while in case of others filling the online application is quite enough. Besides, numbers of state institutions do not provide the registration number that on the other hand cause additional complication concerning with hand over the requested information to recipient on time.  Journalists as well as the speakers stated that having similar standards on “FOIA” request must be adopted by the all state institutions.

Herewith, the journalists have also regarded the launch of a monitoring system of public officials’ asset declarations. Also, members of the seminar were interested in the procedure of verification to information, what kind of verification mechanisms must be established and whether the particular state institution would have the access to public officials’ bank accounts. According to the chairmen of IDFI, details like these are under the consideration process, noted that the initial stage would be verification of information from the side of Public Service Bureau, and followed with passing revealed breaches and faults to law enforcement authorities.

The participants of the meeting analyzed every commitment in detail, including the launching of petition portal as well as civil society participation in the process.

Levan Avalishvili emphasized the importance of the seminars aiming at fostering the fulfilling process of commitments with increase participation of civil society.

“Media must be involved in this process, to disseminate, to extend and to keep an eye on fulfilling the commitments“, – he mentioned.

Ketevan Tsanava emphasized the main advantage of OGP that stands on cooperation between government and civil society.  In light of this, the civil society recommendations have the significant importance on the way of adopting as well as fulfilling the action plan.

“Main principle of OGP is the compatibility of commitments and citizens request, on the one hand to improve open government and on the other, to make civil society involved”, – said she.

She spoke about an OGP Steering Committee meeting held on 25, September when Georgia has been elected as the member of Steering Committee for the first time. The ministry of Justice of Georgia –Tea Tsulukiani represented the county at the meeting in New York.

Above mentioned seminar is the seventh workshop conducted by IDFI on OGP related issues financed by USAID within the project of Good Governance (G-3). 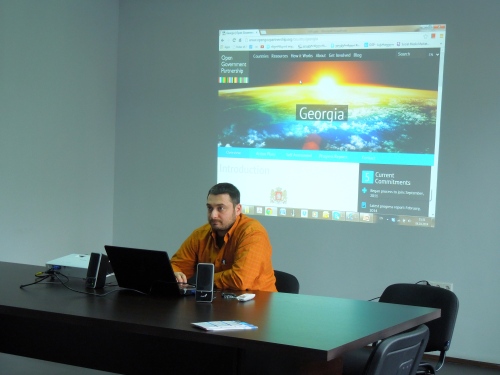 Institute for Development of Freedom of Information (IDFI) conducted another workshop with students about Open Government Partnership (OGP) on October 4th, 2014.  Students of different Universities attended the meeting, held at the Conference Hall of In-Depth Reporting and Advocacy Center.  The workshop was provided in the framework of the USAID Good Governance in Georgia Program (G-3) supported project.

They had been participated in the trainings held within the framework of IDFI project “Enhancing E-skills among Young People”. The goals of these trainings were to raise awareness about E-participation and improve practical skills.

During the workshop Giorgi Kldiashvili, the director of IDFI and co-chairman of  Open Government Georgia Forum emphasized the importance, goals and challenges of the partnership. He explained to them what kind of commitments has Georgia taken and which state agencies are responsible for implementing these commitments.

Giorgi Kldiashvili explained how OGP works and what are the discussion topics in the framework of regional meetings and annual summits. Giorgi also showed videos, which described OGP activities and achievements throughout a year.

Students concern was about the mechanism OGP have to monitor action plan’s implementation, what can be the result if a country does not accomplish its commitments. Giorgi Kldiashvili mentioned that joining OGP is not obligation, it is just a state will, and countries take commitments themselves. Therefore, implementation is country’s prestige. Besides, Giorgi Kldiashvili mentioned that when country joins OGP, it must meet some requirements, if country does not fulfill them the exclusion from the partnership might be set in agenda,

The director of IDFI said that OGP’s goal is to develop citizens’ life; therefore, civil society should be involved in monitoring of commitment implementation process.

Participants of the workshop discussed how can they spread more information about OGP to increase  engagement of people in these activities.

Giorgi Kldiashvili reviewed 27 commitments, which should be implemented by 16 public institutions the framework of National Action Plan 2014-2015.

Institute for Development of Freedom of Information (IDFI) held a workshop for students of Ivane Javakhishvili Tbilisi State University. The topic of the meeting was Open Government Partnership and commitments, which should be implemented within the framework of Georgia’s Action Plan 2014-2015. The workshop was attended by students of Journalism and Mass communication faculty. The meeting was held within the framework of the project fund by USAID Good Governance in Georgia (G3) Program.

Giorgi Kldiashvili, the director of IDFI spoke with students about the importance, goals and challenges of the Partnership. He explained to them what kind of commitments have been taken by Georgia and which state agencies are responsible for implementing these commitments.

Giorgi Kldiashvili covered all the commitments of previous Action Plan, which have already been carried out. He defined liabilities, which should be accomplished by the end of 2015 and explained how they are related with citizens.

Students have paid special attention to the commitment about online asset declarations of public officials. They expressed their interest toward the ways of checking reliability of the information that officials publish about their property.

The main topic of the discussion with students was citizens’ participation. e.g. in state budget planning. Giorgi Kldiashvili explained to participants the meaning of civil society and how citizens can have influence on the government with their participation and activism.

On 24th of September Institute for Development of Freedom of Information (IDFI) held the workshop with students of Training Center for Liberalism within the framework of the project Facilitate Open Government Partnership Initiative fund by USAID Good Governance in Georgia (G3) Program.  Levan Avalishvili, chairman of the board of IDFI told students about activities of Open Government Partnership. The LibCenter unites students from various universities and faculties.

The workshop was attended by the previous and current groups of Libcenter. Lavan Avalishvili underlined the importance of open data and accessibility of public information. He explain the participants how they can use data and control the state authorities through this way.

The chairman of IDFI defined to students how OGP works, what reforms were implemented within the framework of previous Action Plan by the government. Second part of the meeting covered future plans. Levan Avalishvili mentioned that Georgia’s National Action Plan of 2014-2015 comprises 27 commitments to be implemented by 16 responsible agencies. He explained what each of them means and what kind of benefit they will bring for citizens.

Students were interested in commitments which are connected to public information such as Developing Citizen’s Portal my.gov.ge, Creating open data portal – data.gov.ge and E-petitions portal I-Change.ge.

They asked the speaker to clarify how  electronic catalogues of the documents preserved in the Ministry of Internal Affairs Archive will be created and publishd as well as how it will be possible to use documents kept in the Archive.

Levan Avalishvili answered all questions and emphasized the importance of citizen’s participations on OGP and explained them how they can become involved in working process of OGP action plan. 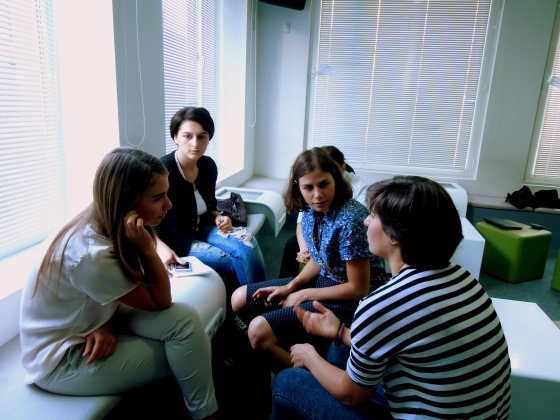 On 23th of September Institute for Development of Freedom of Information (IDFI) held discussion with students at Multimedia Education Center (MEC). The workshop was attended by students of various universities and faculties. The workshop was organized within the framework of the project “Facilitate Open Government Partnership Initiative”. 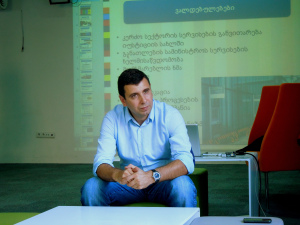 Levan Avalishvili, chairman of the board of IDFI explained to the students how OGP works, which commitments will Georgia implement and what should be done to increase participation in working and monitoring process of OGP Action Plan.

Levan Avalishvili has defined each commitment and asked students to create one commitment for Tbilisi City Hall, which should be accomplished within the framework of National Action Plan 2014-2015. Having discussed, the participants have agreed that Tbilisi City Hall should implement services focused on communication with citizens, improving traffic flow and decreasing air pollution.

Students believe that the web-site of Tbilisi City Hall should have a function to issue any sort of authorization electronically. Besides, the participants think that citizen service at Tbilisi City Hall is one of the significant problems, which could be improved by introducing electronic registration in queues. As one of the participants has noted, if the citizens are able to learn the number of those standing in the queue from the web-site, and are also able to receive queue number from home, they will spare time and resources.